So before jumping into this post, I want to apologize.  I realize this is a DK PvP blog, and very little of my content lately has been class, or even PvP information.  But with the expansion so close, there just really isn't much in the way of news, on either front.  However, let me explain how things are going to work following the expansion's release.  First, there's gonna be a ton of DK content, while I'm leveling/thinking about specs, and then you can count on some serious PvP info once Season 9 goes live, and I have a chance to jump in there.  *Real* content is coming.  Just let me ask you to sit through a few more editorials while we wait for Cataclysm to go live.

Anyways, random preface aside, let me get into the meat of this post. 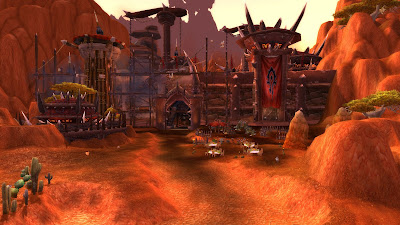 If the above image or Orgrimmar doesn't mean anything to you, then I'd suggest you're either playing the wrong side (*cough* I mean the other side *coughs*), or you've been out of the game for a very long time.  The world is very, very new, as everyone is now acutely aware.

But with Cataclysm coming, a lot of people are beginning to drop the whole "Wow, a new world, this is really cool" routine, and just focus on the good old min-max we're all so familiar with.  A good in-game friend of mine told me today that she had a group of players she'll be leveling with in Cata.  Their plan is to band together, take time off work, then shoot for the Realm First:  <class> to 85 achievements.

Sure, this is a completely valid idea, and should be lots of fun.  After all, it's a group of them, and they'll have fun leveling together.  But I can't help but question how much of the world they'll be missing out on by doing that.

I know, I know.  You're all gonna tell me the same thing.  "But Onike!  No one reads that silly quest text.  It's a waste of time.  You could already be halfway through the quest."  True.  And in the old game of "Go get me 10 boar tusks", this made a lot of sense.  The lore behind fetching 10 boar tusks doesn't really matter, in the grand scheme of things.  But it hasn't taken long for me to find that this simply isn't the same game it used to be. 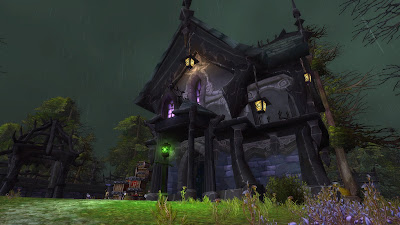 If you haven't go roll a new character of your favourite race.  You'll find all the old quests that used to bore you totally gone.  Better than that, the content has done more than just change.

I've found myself actually fully enjoying the process of leveling, which is something I used to HATE with a passion.  Leveling was a boring, pointless grind, just serving the purpose of taking me to the endgame, where I could play the real game.  That is just not the case any more.  The content they're putting in with Cataclysm is a whole lot more interesting.

Remember how awesome Wrathgate was?  Remember thinking "Man, if only Blizzard could do this with all the quests."  And how everyone just thought, well then it wouldn't be special?  Well think again.  I won't say every quest has an epic cut scene, but there's a lot of them.  Zones have some serious continuity.  There's more than just level to level, ding to ding, happening here.  There's a story.  And it`s good. 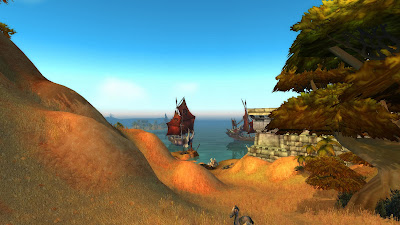 So, if Blizzard has content that good from levels 1-10, simply designed to grab attention of new players, imagine what's in store for the primary content of the expansion?  You can count on the content being beyond good.  Which brings me to the point.

Do you want to miss out on all that?

Sure, if you power-level you'll have a chance to see the cutscenes.  They won't go away.  But they'll be nuisances, distracting you from the real goal of filling that experience bar.  And without the understanding of 'why' you're sneaking into a worgen meeting, seeing two of them argue, then kill a Forsaken spy wouldn't make much sense would it?  You'd only really have a chance to say "Oh.  Cool."  Then on with the next quest.

Now I'm sure you can take an alt through later, and experience all that content at a nice, slow pace.  Read that silly quest text and everything.  After all, that Realm First achievement only goes out once.  But you know what?  Powering through the content is going to spoil it, at least for me.  The new zones will only be really new once.  And racing for that Realm First, which will only really be impressive for a few weeks of your life, is not worth wasting some of the best leveling content to date.

I think we're all too focused on constant achievements.  Maybe, if some of these gogogogogonow player types took some time and smelt the roses, they'd find themselves enjoying the game a whole lot more.