Hardware: The Hidden Basis of PvP?

I recently had the misfortune of losing what is, to many gamers, a very important piece of equipment.  My mouse.  It was a wirless mouse with two extra buttons alone the side (which I had bound to FS and HB), and I was sorry to see it go.  But this put me in an interesting place.

See, I run WoW on a laptop.  Which means, technically speaking, I have a trackpad, which is a built-in mouse.  I'm actually extremely comfortable with the laptop's built-in mouse, so I figured I'd take a crack at playing WoW using just this.

I'd always had a vague notion that in the world of PvP, 'keyboard turning' was a major faux pas.  You don't want to ever tell another PvPer that you *gasp* keyboard turn, because that immediately puts you at the very bottom of a long ladder of PvPers.  It seems like the PvP community believes there is a special circle of Hell reserved for keyboard turners.

I'd always largely considered this a bit of an exaggeration.  I have a friend who keyboard turns (granted, she plays a warlock, which is a casting class.  Melee classes like the DK move a whole lot more than they do), and she does fine.  What's the big deal about keyboard turning?  I'll just keep one hand on the arrow keys, and one had on my keybindings, and I'll tear it up?  Right?

I think I ran a total of three Battlegrounds keyboard turning my little DK around, and it was more than enough to last me a lifetime.  If I never find myself without a mouse again, it'll be too soon.  Maybe in less movement-intensive raid fights you can keyboard turn.  Maybe.  And maybe casters can sometimes get away with it.  But PvPing a melee class, I simply can not.  Which meant one thing.

It was time to go shopping.

Everyone has heard of crazy mice such as the legendary Razer Naga, which has an additional 12 buttons, just down the side, let alone everything else packed in.  But I needed a mouse right away, and didn't want to wait for it to be shipped in (no store within many miles of my house would ever carry specific gaming gear like that).  I've also heard mixed things about the Naga, people saying it's too cramped et cetera, et cetera.  So I went to a local Staples, and perused their selection of mice. 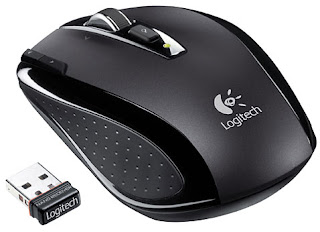 Eventually, I settled on the Logitech Marathon M705, in part because it was on sale, and in part because it is a very comfortable mouse to hold  (which is important when you use it as often as we WoWers do).  As it turns out, the mouse actually has a lot more features than my old one, with two buttons down the side (as before), but with also a left and right wheel button (triggered by pushing the wheel left or right) and a hidden button beneath the padded side (below the two standard ones).

What this means is that I've been able to bind a lot more of my abilities to my mouse, and this has (not surprisingly) seriously increased my performance.  Muscle memory hasn't quite set in yet, but a lot of my cooldowns and defensive OMG buttons are now a quick movement of my thumb away.  Where I used to have to clumsily hold CTR + A for my Chains of Ice (sure, I could have bound it to something else), I now simply twitch my thumb.  Where Army used to require a complex bending of my keyboard, I now flick my middle finger (taking flipping the bird to a whole 'nother level, if you ask me).  It's a lot more intuitive, especially for PvPers, where quick timing is everything.

This whole situation, of course, got me thinking about hardware in general.  How much of a difference does it make?  Does buying a fancy keyboard, or a really nice mouse greatly improve you game?  Will I take some rogue apart the next time I PvP because my mouse is better than his?

No, obviously not.  PvP is largely about skill, and simply understanding your class well-enough to kill other classes with it.  Does my mouse define my skill as a player?  Absolutely not.  But it does make a difference.  And maybe at some point I'll duel somebody and beat them with 100 health left.  And then I'll be talking to that person and learn they have a standard mouse, with a left and right click and a wheel in the middle, no extra features packed in.  And I'll be glad I've got my Marathon M705, because in that case it probably mattered.

Does a gamer's hardware define their play-experience?  Obviously your computer does.  Another notable DK in my guild runs WoW on a largely custom-built gaming rig.  She pulls a remarkable 50 fps while idling, with every setting turned up to Ultra.  Apparently the lowest she ever sees her fps is 30, and only in high stress raiding/PvP.

Whereas my Inspiron, with a built in chip-set for its graphics card, and a fairly small amount of RAM pulls an average of 8 fps, with every setting turned down as low as it goes.

Does THAT make a difference?  Well... yeah.  It's a huge difference.  But not everyone can drop the kind of money that computer cost.  So it boils down to the little things.  Your mouse, your keyboard.  And sometimes, hardware can matter.

That's not to say a hardcore arena player could not sweetly kick my ass into the next millennium, regardless of mice or hardware.  I'm a horrible 1v1er, and the first to admit it.  But I've got a mouse that does everything I want it to.  And I've gotten a little bit better as a result.

So what can you take away from all this?  Maybe nothing.  But maybe the next time you let loose that SHIFT + CTR + ALT Q super-combo spell, you can consider how easy it would be with a mouse button.  And the next time you see a sweet mouse on sale, you might just pick it up.
Posted by Onike at 9:26 AM