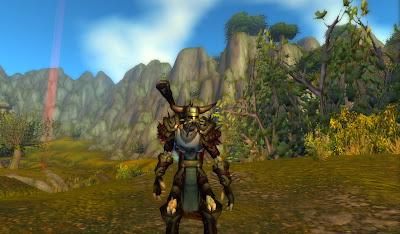 With Cataclysm fast approaching, one of the highest priorities on this list of many PvPers is how everything will play out with the implementation of Rated Battlegrounds.  These will act as arenas have in the past, yielding a rating which will increase with every win, and allowing the purchase of high-end PvP gear with Conquest Points (which will be earned though arenas and rated BGs).  Since Season 9 is scheduled to go live a couple weeks after the release of Cataclysm on December 7th, by the time you've got a team of players up to level 85, you will most likely be able to jump right into competitive PvP.

What does this mean for us now?

It's in your best interest right now, to familiarize yourself with premades and group make-up for PvP.  Especially if you've not had a competitive PvP experience in terms of BGs through the duration of Wrath, or even BC and vanilla.  You should start thinking about putting your premade group for Cataclysm together now, not after the release.

That's not to say that if you can't find a team now, you won't be able to run Rated BGs come Cata.  You'll absolutely be able to fine one after the expansion releases, in fact it will probably be easier after the 7th.  Why?  Because lots of teams will be recruiting.  But you'll be missing out on one of the most important things you can gain between now and Cataclysm.

Yes, it matters.  If you get a team together NOW, and you practice with them NOW, you'll have a leg up on everyone who's still trying to figure Rated BGs out after the expansion goes live.  You'll have a chance to really get used to working with your group,and what each individual player can accomplish, as well as what you can pull together as a group.  So, with that in mind, I'm going to be posting a series of posts running you through some strategies to try to consider once Cataclysm drops.  And today I'll talk about group make-up.

The size of your premade group depends entirely on how many PvPers you can  get together.  Maybe your raid group already wants to PvP and you'll be able to jump right into Alterac Valley (which is going to be a 25 man come Cata).  Maybe you're smaller, and you'll be running only 10 mans, and PuGing five players to run 15s.  Or maybe you'll be creating more than one BG team, because you have  so many players.

As Cynwise pointed out a while back in his post on Rated BGs, it's probably a good idea to shoot for AROUND 15 players.  That way you can always run 15 mans, or 10s if everyone doesn't show.  Or you can run an Alerac Valley with a few PuGs if you get extra.

But once you've decided on a rough number, a lot of the decisions about how you want your team to function is up to you.

Ask yourself this question:  "How do I want my team to work?"

Do you want a super-aggressive, all-out beserker team?  Do you want a team that will capture objectives, then turtle them effectively?  Or do you want a balanced, all around team that you'll adapt on the fly.

With those questions in mind, let me introduce you to the four kind of players I'm grouping PvPers into.

Melee dps is your front line in a Battleground scenario.  While other kinds of players will hang back and attack from behind, melee dps rushes right in (or maybe sneaks in if we're talking ferals or rogues).  They're very important to the group as a whole, because as long as there's a bunch of crazies breathing down your throat, an unorganized team won't have the smarts to take a minute, and focus down your healers (more on that later.)  Melee dps also often has a lot of interrupts available (especially if we're talking DKs) and can be a huge asset in bringing down the opponent's healers.

The Melee's biggest weakness is that it tends to die.  A lot.  Before casters go down, and sometimes before even the healers go down, it's not uncommon for a group to just go after whatever's right in front of them.  And in almost every situation, that's going to to be your melee dps.  Losing this front line means your squishier players are vulnerable, so if the other group takes the bait and goes for your melee, it's important for healers to keep them alive.


The ranged dps essentially performs the same tasks as the melee.  They do damage.  Lots of it.  But unlike  the melee who need to be right beside a target to blow it up, ranged dps can nuke those baddies from behind your melee.  They can also be positioned more strategically, like little turrets, standing up on higher ground, or in other clever places, out of reach of the enemy melee dps.

The ranged dps also suffers from the unfortunate weakness of generally being fairly squishy.  A warlock is, as a general rule, easier to kill than a paladin.  Sure, there are some specs, like frost mages, that have more defensive cooldowns

Possible one of the most important roles in a BG, the healer is that guy that keeps everyone alive.  Once we've had a chance to get our feet wet with premade vs. premade Battlegrounds, I suspect one the main  points in team-building will be the number of healers to bring vs. the number of dps.  A healer doing their job can make or break an encounter.

With this in mind, it's EXTREMELY important to do your part (assuming you aren't healing) and keep your healers alive.  Keep those pesky dps CCed and off your heals as often as possible.  A poor-playing PuG (which is what a premade will probably streamroll a lot of before Cataclysm) might not target your healers, but count on other premades focusing yours down in the blink of an eye.  Healers are what makes Crowd Control in larger-scale PvP just as important as it was in places like the arenas.  Heals make or break a group.

4.  The Off-Healer or the Secret Healer

This is one of the sneakier things you can do with a premade group.  When your team breaks up into little groups to capture certain objectives, you can cleverly plant a player that can heal, but doesn't.  This means you have a character who is specced to heal, and geared and experienced enough to do the job, but have them dps, or pretend that they are.  See, in most cases (with the possible exception of a Holy Paladin, which has a much greater mana pool than any other pally spec), it's almost impossible to distinguish a healer from another member of your group.  Lets use the example of a priest.

What you would do with said priest, is have them specced for healing (let's say disc), but cast a lot of shadow spells.   Now a group that's got their wits about them will notice the priest isn't in shadow form.  But they're probably not going to be looking too closely at that, they'll be going after the paladin a few feet away that's healing like crazy.

Until the group's ordinary healer starts having trouble, you have this closet healer just pretend to dps.  Keep them off the enemy's radar.   THEN, once your main heals starts having trouble, they switch gears and start healing up a storm.  If the other group took the bait, and hasn't been attacking that first healer, this will almost certainly wipe the other group.  However, expect it to only really work once, after you've tricked the other team, they probably wont' fall for it again, and your secret healing player will be up at the top of the hit list with the rest of your heals.

Now, once you've got a rough idea of how you're planning to use each kind of character, you'll have to think about how exactly you're going to put them together.  Working with your team mates, and gaining some serious team synergy, is one of the greatest challenges you'll face as a Battleground group.  But if you take some time now, and practice, you'll find you've left this expansion with something lasting and important, that will carry you well into Cataclysm.

Experience
Posted by Onike at 9:01 AM