So there I was.  At the release of Cataclysm.  Wetting my little gamer pants at the prospect of the fantastic wonders in store for me.  Now, because I wasn't in the beta, I actually made a serious effort to avoid all spoilers related to Cataclysm.  As a result, I had absolutely no idea what I was doing when the expansion popped.

I did have a rough inkling that I wanted to head to Mount Hyjal, because I wasn't huge on the idea of a zone totally underwater.  After all, who wants to swim everywhere?  That's just silly.  However, after being unable to find "The Big Board" in Orgrimmar which a guildy kindly informed me was the path to Hyjal, I decided to go to the other way, after all a conveniently timed vision of Thrall as I entered Orgrimmar directed me to Vash'jir.  And there would be less people there.  So why not give it a shot?

Onike's Disclaimer:  This is NOT a "real" leveling guide.  It's just a rough outline of the zone, and my initial thoughts on Cataclysm questing.  If you want a step-by-step for the 80-85 zones, look elsewhere. 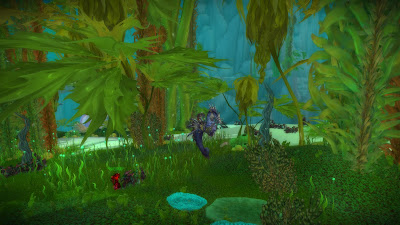 Vash'jir is actually really easy to find your way into.  Just get into Orgrimmar, and after witnessing Thrall's message to you from the Maelstrom (more on that later), you receive a quest which will lead you to a member of the Earthen Ring, who sends you off to a boat bound for Vash'jir.

Train your professions!  This is really important.  Don't be like me, and forget that to get to 525 skill, you actually need to visit a trainer.  Especially if you're packing mining, which is  now worth experience (presumably herbalism is as well... but I don't have an herbalist, so I can't be 100% sure).  That way as you're travelling around, you don't have to worry about getting skill ups for your effort.  First Aid is also handy to carry around, especially if your class is lacking in self-heals.

After an exceedingly awesome cut scene, you'll find yourself at the bottom of the ocean.  Now this is the part where I want to stress something.  You know those old quests that would have you swim to the bottom of lakes and kill mobs, etc. etc.?  And how boring they were?  Vash'jir is nothing like this.  You get a zone wide buff which allows you to breathe under water, and swim faster, and about halfway through the first zone, you're given a seahorse mount to swim around on.  The seahorse increases your swim speed by a ridiculous 450% while in Vash'jir, and it makes it so that you often forget you're actually under water.

If you're like me, and used to being all epic-ed out at level 80, running about 2-shotting mobs on your dailies, you're in for a wake-up call.  Mobs hit hard now.  Really hard.  You'll find yourself frequently stopping to rest, and actually blowing cooldowns on pulls of more than one mob.  In fact, I'd advise against pulling more than one mob, if you can avoid it.  They've got around twice as much health as Northrend mobs, and a few fights with even the entry-level 80s, will take you down pretty low on health.


Also, a friendly warning.  If you use a lot of AoE spells (read: Howling Blast) regularly in your rotation, make sure you're not in range of other mobs, which it's all too easy to accidentally pull.  In Vash'jir, there are a huge number of non-agressive wildlife mobs, which hit as hard as the aggressive ones, and it's easy to pull them by mistake, turning a simple fight into a very difficult one.

It's not a term you're probably used to hearing.  But the way zones in Cataclysm are structured, it really feels as though you're progressing through a story.  Vash'jir has a plot, and so do all the zones which follow.  I HIGHLY recommend reading quest text, at the very least for the main quests.  You'll feel like you're really a part of the story, and it makes leveling way less of a drag than it has been in years past.

Anyways, after pushing your way through the Kelp'thar forest you'll eventually be told (literally- there's a lot less guess work in terms of where to go next than we're used to), to go to the Shimmering Expanse.

In general, this zone is GOOD.  Not amazing, but a lonnnggg way from the grind that vanilla content was.  I think it was about halfway through this zone that I stopped counting the experience points until I leveled and finally started really enjoying the process.

This zone is awesome.  It's a lot of fun.  About a quarter of the way through the zone, I dinged 82, which means I could have easily dropped out of Vash'jir and headed off to Deepholm.  My friends who were in the thick of their Realm First <Class> achievements races, while I was poking around in Vash'jirVash'jir out to the very end, baring dungeon quests, since I didn't want to tank and couldn't stomach the 30 minute dps queue.

Trust me, if you stick it out to The Abyssal Depths, if you aren't already in love with the zone, you will be.

Although a lot of people will probably go into Vash'jir just because it's less crowded, if they actually allow themselves to get caught up in the story, like I did, I guarantee it's worth what some min-maxers are already dubbing "the long way from 80-82".  It's absolutely, 100% worth it.  So grab a bathing suit, and go swimming.  You'll have a blast.

It's kind of like being a little kid at Christmas.  You want to play with everything at once, take it all in in a few seconds.  But don't worry, those quests aren't going anywhere.  So enjoy the ride.  Trust me, it's not hard.
Posted by Onike at 6:27 PM