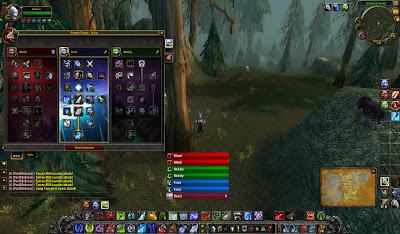 Since my last post that discussed specific spec/rotations really left a whole lot more questions than answers, I decided to throw up a more in-depth run-through of the spec I've been playing basically since 4.0.1 dropped.  No credit goes to me for creating this spec, or this rotation- I heard about it from Felandis (Also on The Venture Co. US), but I'm not sure he invented it either.  At any rate- let me dive right in.

The spec, done out nice and clearly in the WoWhead talent calculator is this.  Glyphs aren't a huge deal, the same standards apply to this spec as to any other frost DK spec.  If there's any confusion about what glyphs work for Frost PvP, I may discuss that in a future post.  For the time being, allow me to explain a little bit.

It's your new best friend.  This spec takes advantage of the new mastery system, introduced with the patch- which essentially gives you an extra 2% frost damage for every point of mastery rating you can get (Note:  mastery RATING, and you overall mastery are different things.  For example, my master is around 140, but my Mastery Rating is 14, giving me a 28% increase to all frost damage).  I'd recommend reforging crit on all your gear to mastery (since if you're in PvP gear, crit is really the only thing you can drop), since the bonus from mastery is better than pure crit.

What all this means, is that basically ALL your frost abilities are going to be hitting a lot harder.  And for the purpose of WPvP and BGs (which is really the only kind of PvP you can do until cata drops, since the arena season is done), being able to hit a LOT of enemies, really hard is a very nice thing indeed.  Howling blast with reforged mastery and my wrathful 1800 weapon hits for around 3.5-4k ish, (not including crits, obviously- those are exponentially higher) on every target.  This means assuming healing support, it's not impossible for you to AoE down an entire pack of allies (or horde, if you're on THAT side) with this spec.


I discussed this a little bit in my first post, but managed to confuse more people than I helped, so let me lay it down right here, very simply.  First, this spec does not use obliterate.  The reason being that obliterate ties up a frost rune, which eliminates one howling blast each time you use it.  One very important thing to keep in mind is that this is an AoE build.  Obviously in 1v1 situations, using the normal frost rotation makes a lot more sense (more on that later).
So with all that in mind, the way the rotation for AoE basically works is you start off with HB/HB then while your frost are on CD hit a couple PS (to get up another disease) then two BS.  As soon as your frost are off cooldown use HB x4 (since you should now have two death runes), then ERW, and rinse and repeat.  When Killing Machine procs, use FS (since OB ties up that sneaky frost rune).  Eventually you'll either be bursted down, or everything in sight will be dead.
Let's shoot for the later.
Single Target?  I know the question is going to be asked, so let me explain right here- that rotation makes less sense for single target dps.  Single target frost is a whole other animal.  It's a priority-based system which boils down to this:  1.  Get diseases up2.  Obliterate if both frost and unholy runes are all up (Or if both Death runes are up, OR if Killing Machine procs).3.  Blood Strike (if you've got two blood runes up)4.  Frost Strike5.  Rime (= HB)6.  Obliterate7.  Blood Strike (if only one rune is up)8.  Horn of Winter (a buff is better than doing absolutely nothing- and this should be kept up as much as you can).  This chart is a priority chart (for those who haven't seen one before), tier 1 is more important than tier 2 which is > than tier 3 etc. etc.  Conclusion:  AoE>Single Target  Here's the thing though, in a Battleground or in WPvP, 1 on 1 combat is pretty rare.  So, you're not going to find yourself single-target dpsing very often.  With that in mind, this spec really focuses more on AoE, and contributing a lot of dps to a lot of targets at once.  If you're totally new to frost dps post 4.0.1, and are planning to PvP extensively, I'd recommend learning to understand the standard AoE rotation before you worry about learning single-target dps (which is what you're going to have to understand if you raid a lot, obviously). Anyways, that basically covers AoE frost PvP.  Expect to top out damage frequently, but probably not get as many killing blows as other classes/specs might, since they go after one character at a time.  Used properly though, you can be a huge asset to your team with this tactic.  Bombing all the enemies down makes picking them off much easier for the rest of your dps. That's it for today folks! Practice safe death! ~Onike