My informal leveling guide/review returns with the next installment of brilliance.  Today I'm going to be going over the second zone I leveled through in Cataclysm- Deepholm.

Deepholm, unlike Vash'jir cannot be separated into a series of smaller zones, it's one, big zone.  It can, however, be broken up into the pieces of the plot which the zone takes you through.

The Elements are Angry 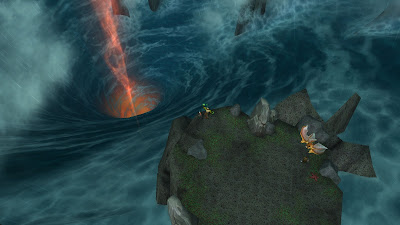 You're called to the zone by Thrall, who wants Alliance and Horde to work together to heal the world, which was damaged when Deathwing busted out of Deepholm.  That's right, this zone takes you right into the Earth Plane.  Deepholm is the area where Deathwing hid out while he was licking his wounds.

The main plot of the zone focuses around the need to heal the World Pillar, which is exactly what it sounds like:  a giant pillar in Deepholm which supports the entire world.  It's been broken into three pieces, which, as you can imagine is a bit of a problem for... the world.

The Earthen Ring tasks you with the fairly clear job of reassembling the shattered World Pillar, which takes you all across Deepholm, and through another one of Cataclysm's great zones.

The First Two Pieces
The first piece of the World Pillar takes you up against the raging Elementals of the area, and follows a pretty clear storyline.  You fight off the bad Elementals, save the piece of the Pillar, and do some quests.  Now I'm not saying this part of the zone is "bad" at all.  It's as good as any of the leveling we've seen in Cataclysm so far.  It's just lacking interesting twists and story which made Vash'jir so good.

However, it's during your quest for the second piece where things really start to get interesting.  In a surprising twist of fate, it turns out the Elementals aren't the bad guys here.  The Twilight Cultists are.  Now we knew the Twilight Cult was bad, but we didn't know they were in Deepholm.  Turns out, they're the ones that got Deathwing ready for his big, dramatic return.  And the reason the Elementals are attacking the Earthen Ring people, is because they've been pissed off by the Cult.

From there, fairly obviously, your job is to work out a somewhat diplomatic solution with the Elementals while looking for the second piece, which is with the Earthmother, the Elemental in charge.  You work for the Lords (their official name escapes me for some reason... Stone Lords, or something like that), in order to prove yourself to the Earthmother.  It's not the most original plot ever devised, but it's interesting and engaging and just as fun as Vash'jir was.  In other words- awesome.


The thing that makes leveling in Cataclysm is the little bits of awesome thrown in between the main plot points.  While hunting around for the second piece, you're sent to investigate an alliance airship, which reportedly attacked the Horde (unless you play alliance.  I have no idea what happens if you play alliance... sorry).  Turns out the Twilight Cult poisoned the supply of food and water on the ship, which killed of the crew.  While there, you meet the dwarf featured in the image above.
And it is a TON of fun.  During your somewhat predictable journey through the ship looking for the Cultist in charge, you eventually capture the bad guy by grabbing him with a GRYPHON.  No, that bird is not just for show.  The dwarf dangles the ogre in charge over a spinning propeller to get her information, it's a random piece of badassery that you just don't except.  I was predicting the ogre to fling himself overboard rather then give us what we want... or something.  But no, this dwarf chick basically beats the information out him.  Which wasn't expected at ALL.  But was really awesome.
My point?  Blizzard can throw in some wild cards that really makes their world seem alive.  Expect the unexpected.  The only guarantee in Cataclysm seems to be an awesome game.
The Third Piece
The third piece of the World Pillar is found with the Twilight Cult, and some very nasty dragons.  The result is a battle of epic proportions between the Earthen Ring allied with the Elementals and the Twilight Cult.  Your job during the war is essentially to take out the main figures of the Cult, which is actually very interesting.  Each "boss" is an elite, but is soloable.  They aren't tough because they hit so hard, or have so much health, that a player alone could never take them out.  They're difficult because of unique mechanics.
Although Blizzard probably could have made these "Solo Bosses" a little bit tougher and gotten away with it, what they've succeeded in doing here is challenging players with solo content.  In other words, encounters designs based around one player, instead of a group or raid.  This is something we haven't seen a lot of before, and was good fun, and certainly lived up to my now high expectations of Cataclysm.
Epic?  Yes.
Deepholm was a great zone, all in all.  It didn't surprise me in the way Vash'jir did, because I expected awesome, and I got awesome.  But it was amazing.  I won't spoil the ending for you, but the battle with the Twilight Cult is a whole lot of fun, and continues to impress upon me how fantastic Cataclysm really is, in terms of leveling content.  Will the endgame be as epic?  Only time will tell, but based on what we've seen....
Yes.  It will.
Posted by Onike at 4:46 PM